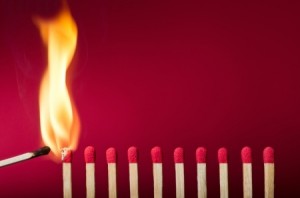 For many homeowners, the threat of a house fire is a far off, amorphous fear. We change the batteries in our smoke detectors, get the fire extinguishers inspected once a year, and then we do our best not to think about it. And who can blame us, really? A house fire is a singularly terrifying event; one that most of us would rather not dwell on on a day-to-day basis.

Unfortunately, however, by keeping the possibility of a house fire tucked away in some dark corner of our consciousness, we do a grave disservice to our own safety and wellbeing. The first line of defense against fire is understanding how a fire works.  We’ll take a look at the anatomy of house fires.

Every fire, household or otherwise, requires three elements for ignition. Oxygen, heat, and a source of fuel. Starve a fire of any one of these three elements and the chemical reaction stops, thereby smothering the fire. Most fire extinguishers, for example, suppress fire by displacing oxygen with another gas such as carbon dioxide.

As homeowners, one of the most effective ways to prevent fires is to limit the amount of fuel in our houses. Whenever possible, purchase flame retardant fabric items such as curtains and rugs. These items will generally be marked with a tag indicating their fire resistance. Also, be sure to keep flammable items away from sources of heat in your home. Even incandescent bulbs can reach temperatures high enough to ignite the paper sheathing on drywall. Consider purchasing low heat output fluorescent or LED bulbs instead.

Some people are unaware of just how quickly a fire can start and spread. A fire can become dangerous in less than a minute. And while occupants used to have a 15 minute window to escape from a house fire, the amount of synthetic materials in today’s homes can provide enough fuel to completely engulf a home in just a couple of minutes.

Once a fire becomes large enough, it’s not necessarily the flames that present the danger; it’s the byproducts they produce. The heat in a room on fire will skyrocket by hundreds of degrees, with temperatures varying widely from floor to ceiling. The lower you are, the safer you’ll be. However, when a room becomes hot enough, the entire thing could burst into flames in what’s called a flashover.

Smoke plays as much a role as the heat, producing toxic gases that you might be breathing in before you even wake up. Once a room is engulfed in smoke, it will be pitch black. The combination of not being able to see and not being able to breathe is incredibly disorienting, making prevention even more crucial.

Fires happen quickly, but by understanding them and exercising caution we can stay one step ahead. A residential sprinkler system in conjunction with a centralized fire alarm can give you an enormous leg up on budding house fires.

Don’t wait till it’s too late. Contact Fire Tech Residential Sprinklers of Montgomery County, Maryland to gain the peace of mind in knowing that you and your loved ones will be protected from blazes that happen to spread faster than ever before.